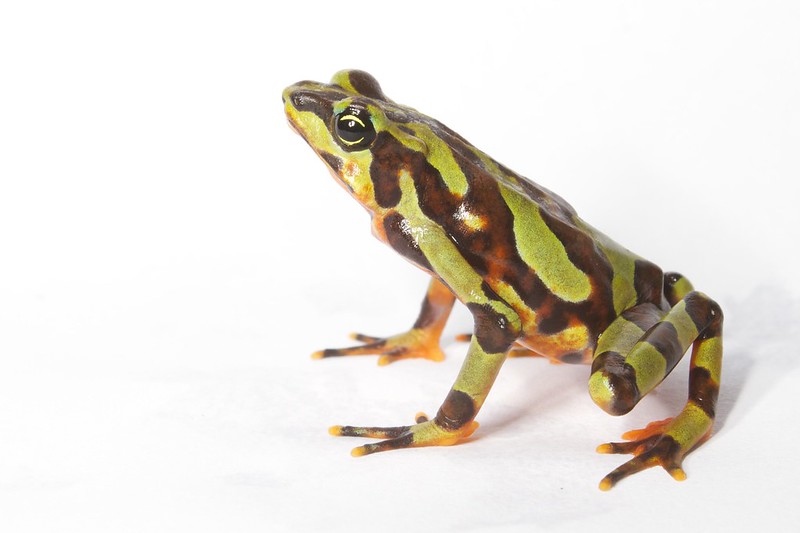 How Technology Can Be Used to Save an Endangered Toad

Have you ever heard your parents complain that technology is bad for us? After reading this, you might be able to tell your parents why not all technology is bad. Technology is more than just a smartphone and is key to helping save some species from extinction. The bright yellow and black Variable Harlequin toad (Atelopus varius) is listed as “critically endangered.” But now thanks to a group of experts and technology, these toads, which are also called the “Clown frog,” could be saved.

High up in Panama’s Santa Fe National Park lives the Variable Harlequin toad. They live in the rainforest where it is damp, with streams nearby for the females to lay their eggs. During mating season, the male will appear to wave at the female to attract her attention. It’s thought this is because the sound of the rushing water drowns out his mating call. For the female, the ideal place to lay her eggs are on stones and boulders in rushing water. She will lay 30-75 eggs in long strings, which will hatch into tadpoles. The tadpoles are prepared for fast moving water as they have a flattened body and an abdominal sucker to stop them being swept away.

One of the main reasons that Variable Harlequin toads are critically endangered is because of a fungal disease called chytrid. This disease is thought to be the main reason why some tropical amphibious species around the world are becoming endangered. Chytrid fungal disease affects the toad’s skin, which is how they “drink” water and breathe. A large toad and frog population is often a sign of how clean the water is. Other threats to the Variable Harlequin toad include climate change, habitat destruction and the introduction of the Rainbow Trout fish.

How has technology helped these endangered toads in their quest for survival? Using specialist technology, a team of scientists at Manchester Museum UK have successfully managed to breed the critically endangered Variable Harlequin toad in captivity.

“The University is the only institution outside Panama to house these toads; it’s a huge responsibility the team do not take lightly. So we’re over the moon we’ve achieved the first captive breeding of this remarkable species,” explained the curator of Herpetology at the museum, Andrew Gray.

The team of experts who are also part of Manchester University UK, began by monitoring everything about the toad’s natural habitat in Panama, Central America. Back in the UK, they used the data they had collected and copied the conditions exactly, to recreate their natural habitat. This included getting the right temperature, water level, water flow, lighting, boulders and rocks. The special lighting was needed to be able to grow tropical algae in the museum’s aquarium. The tadpoles feed off the algae with their sucker-like mouth parts. Gray also explained, “These rare toads usually live deep in the rainforest and only go to the streams to breed under very specific conditions, so it was vital we were able to recreate them. It has been 3 years of hard work since six toads were brought to the museum in 2018.”

There are two main reasons why this team has taken on this project together with Panama Wildlife Charity PWCC. One is so that they can raise awareness and funds for their conservation. As this is the only place to see these toads in captivity, people are keen to visit and learn about them. The second reason is to have a “safety net population.” If they do become extinct in the wild, they can be reintroduced.

The team in the UK are working closely with schools and communities in and around Santa Fe National Park. It is hoped that everyone can learn about these critically endangered toads and help in the conservation effort.

There are about 96 or more species of the Harlequin toad, 80 of which are on the endangered or extinct list. They’re special creatures in Panama because the Panamanian Golden toad is their national animal. It’s so important that it is found on lottery tickets, in artwork and there is even a special “Panamanian Golden Toad Day,” on August 14th each year.

If you want to help but don’t know how, you can help support by using their “Sponsor a Frog” programme. You can buy the sponsorship as a gift for a friend or a relative, or just for yourself. When you buy a sponsorship you will receive a letter of thanks, a coloured print of a Harlequin toad, a hardback book of Frogs and Toads of the World and even an invite to a “behind the scenes” personal tour of the vivarium in Manchester to see the toads.

With our help and the use of technology we can make sure these endangered species of toads are given hope.