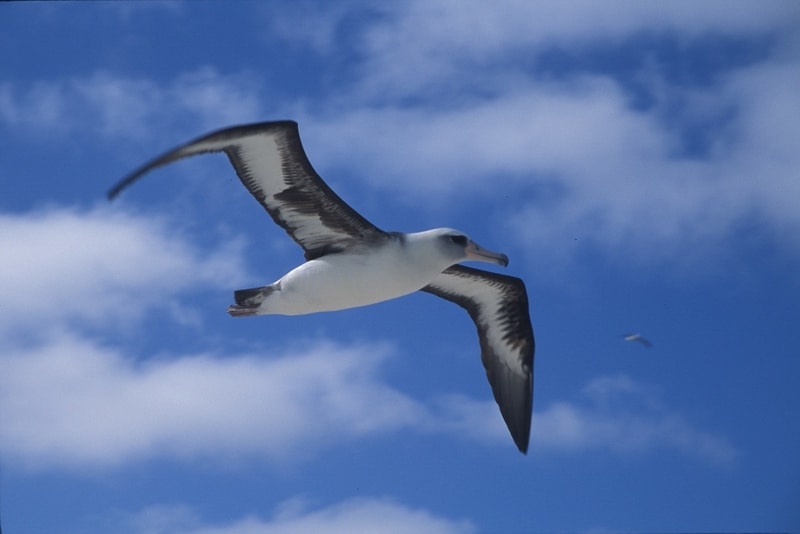 Scientists have turned albatrosses into ocean spies by placing special radar tracking devices on them. The albatrosses, which spend weeks at a time over the open ocean, collected information on illegal fishing boats.

Albatrosses are the world’s largest seabirds. Their spread wings can measure up to 11.5 feet (3.5 meters) from tip to tip. They’re famous for spending long periods of time – sometimes years – over the open ocean, searching for food.

With their incredible eyesight, albatrosses can spot fish while soaring high in the sky. They can locate fishing boats from 18.5 miles (30 kilometers) away.

An even bigger problem is overfishing. In recent years, it’s become much harder for albatrosses to find enough food because humans have taken so many fish from the sea.

Check This Out Next: What are Coral Reefs and How Can They be Saved? In November, 2018, scientists from the French National Center for Scientific Research attached small solar-powered trackers to the backs of 169 albatrosses. Some were adults, others were juveniles (younger birds). Because of their size, the small extra weight didn’t bother the albatrosses.

Albatrosses were the perfect choice for an experiment aimed at tracking boats fishing illegally. “They are large birds, they travel over huge distances and they are very attracted by fishing vessels [boats],” said lead scientist Henri Weimerskirch.

Boats have a strong radar signal which identifies them. By law, this Automatic Identification System (AIS) must be turned on. But boats that are fishing illegally often turn their AIS off, so they can’t be identified.

But boats also have a short-distance radar that’s used to avoid running into other boats, and it’s almost always on.

The trackers worn by the albatrosses collected both the AIS and the short-distance radar signals. A GPS unit recorded the albatross’s location, and another antenna sent the information back to the researchers.

The albatrosses wore the trackers for six months. During that time, they covered over 18 million square miles (47 million square kilometers) of ocean.

In all, the birds found 353 different boats. The scientists were surprised to find that 28% of the ships had their AIS turned off. That suggests that nearly a third of the boats were doing something they shouldn’t have been doing.

The results were slightly better in waters that were carefully controlled. But in international waters, which aren’t controlled by any single country, the rate was far worse – about 37% of the boats had their AIS turned off.

The experiment shows that it’s possible to use albatrosses to keep an eye on illegal fishing. The birds did a job that would have been impossible using boats, planes, or even drones.

But future programs based on this idea will need to be run carefully to make sure that albatrosses don’t become targets for fishing boats.

The scientists are now working on even tinier trackers, which could allow smaller birds to do similar work to protect ocean life.