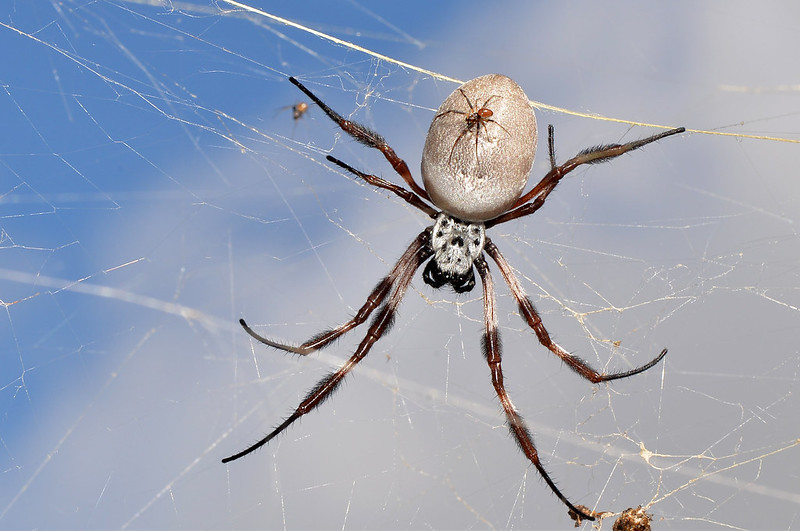 Imagine this: you’re walking along a well-used, dirt footpath through woodland. There are trees above you and bushes alongside you. You’re busy demonstrating to your friend how you can use an Elephant’s Ear plant leaf as an umbrella if it rains. Then you hear a SNAP. That’s when you know. You look down and there, against your black t-shirt, you can see the golden coloured thread. In a panic, you look over your shoulder and crawling up your backpack towards your neck is the hand sized Golden Orb Weaver spider, one of the largest spiders in the world. What do you do? Run? Scream? Or gently ease it off so you can get a closer look? Golden Orb Weaver spiders have one of the strongest webs of any spider in the world. The silk from the Golden Orb Weavers is so strong that if you are unlucky enough to walk into one, you can actually hear it SNAP when it tears.

There is a theory that if the Golden Orb Weaver’s silk was weaved into a thread as thick as a pencil, that it could stop and even repel a 747 jumbo jet at full speed. However, a more useful example of the strength of their silk is shown by hunters in New Guinea. They used the web as fishing nets, by encouraging the spiders to spin their webs in hoops made of bamboo.

The Golden Orb Weaver spider is most famous for building large complicated orb shaped webs at eye level or above. They can be up to two metres across and are built across paths or any other large gaps between tree branches or houses. Their web design and location choice makes it easy for them to catch prey, but also easy for us humans to walk into. However, if we’re lucky, we can spot the female smack bang in the centre of their large orb shaped web, at the last minute.

The complex web is designed to easily catch prey such as small flies, mosquitoes, beetles, cicadas and locusts. Small birds and small snakes have even been trapped within these webs. They will often catch their prey in the early morning and wrap it up in the web. They then feed on it by sucking out the nutrients with their large fangs, a little bit like sucking on a milkshake.

These large spiders are often feared because of their appearance. Thankfully they’re not venomous to humans, only to their prey. But if they’re disturbed they can bite. The female bodies are as long as 4.8-5.1cm, which is about the size of your thumb. This isn’t including the leg span, which can make the female as large as 20cm. This is longer than an average man’s hand span. The largest female ever recorded was 6.9cm, the size of your index finger.

The appearance of these spiders is different between species. The body can be silvery-grey, plum coloured, brown and black or reddish to greenish yellow. However nearly all species of the Golden Orb Weavers have striped yellow/ green and black/ brown legs, which gives them a startling look. The stripes are a warning to predators.

In contrast to the female, the male is usually a tiny 5mm and lives  on the outskirts of the web. He’s a light brown or red colour.

As you might have already guessed, their name, Golden Orb Weaver spider comes from the colour of its fascinating golden silk, making them sound as if they have dropped out of a fairy tale. If you get the chance to look closely, you will notice that their web is golden yellow and shines in the sunlight. These spiders are able to change their yellow coloured silk to appear darker or lighter. This depends on the amount of light and colour in the web’s background.

Check This Out Next: Crows Are Much Smarter Than We Had Thought

And yes, you can spin silk! Imagine if this golden silk was spun into a fabric. In fact, that is what two people decided to do in 2004 in Madagascar, East Africa. 1.2 million Golden Orb Weavers were collected from the wild and encouraged to produce silk which was collected. The spiders were then returned to the wild after about 30 minutes. With the silk, Simon Peers and Nicholas Godley made a golden shawl which was exhibited at the American Museum of Natural History in 2009. In 2012, they made a larger golden cape, which was then exhibited with the shawl at the Victoria and Albert Museum in London, UK.

So, let’s retrace our steps. You’re busy telling your friend about your creative umbrella from an Elephant’s Ear plant, then you spy the large Golden Orb Weaver spider at eye level. Thankfully you stop just in time before walking into it. There is no way around it as its web reaches across the path and the female is positioned right in the middle. You locate one of the web’s strands attached to a branch. You gently break the strand, lift it up and relocate it to another higher branch. The female spider looks angry and rears up with her front legs raised, but she doesn’t attack. This allows you and your friend to walk underneath the web without breaking it. However you do collect a piece of her web and hold it against your black T-shirt to see if it really is shining golden.