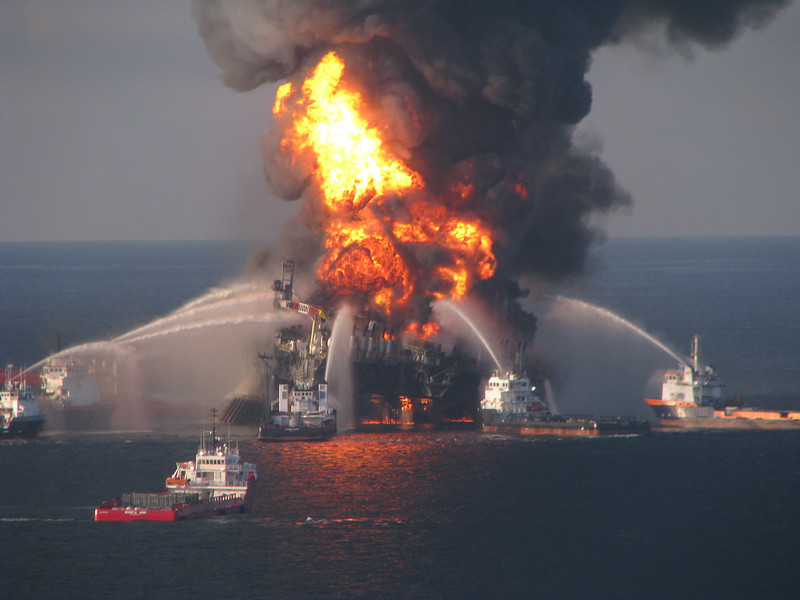 Oil Spills can cause severe damage to plants and marine animals and can take years to clean up.

How Do Oil Spills Affect the Environment?

The world uses nearly 3 billion gallons of oil every single day. We use oil to help fuel our cars, trucks, buses, and to heat our homes. Oil is also made into plastics, which are used to make bottles and smartphones. We rely on oil rigs placed in the middle of the sea to drill for oil or natural gas at the bottom of the ocean. When oil rigs break, it causes oil spills that can severely harm animals and plants.

How is the Environment Affected?

Oil and water do not blend well. When there are oil spills in the ocean, oil floats on the surface of the water, which spreads out into a layer that is thick enough to block sunlight from reaching under the sea.

Oil spills are a major reason that killer whales are endangered. The oil may be eaten or enter the whale’s blowhole, which helps them breathe. Whales will rise over the water to take a breath but if the blowhole is plugged with oil, the whale cannot breathe.Other marine animals and organisms that swim through oil can ingest it through their gills, which can kill them or affect their ability to have babies.

An oil spill affects the coastline. Oil might get stuck to birds and their feathers. Although bird feathers are naturally waterproof, the oil neutralises their ability to repel water and conserve heat and exposes their sensitive skin to temperature extremes. When birds try to clean themselves, they will accidentally ingest the oil that hurts their liver, lungs, and intestines. Feathers are the most important feature of a bird. They allow birds to jump off the ground and soar in the air at speeds high enough to shoot in and out of water. However, these are only possible if a bird’s feathers are healthy.

Check This Out Next: Plastic Litter in the Ocean Will Triple By 2040 if We Do Nothing To Stop It

How do we Clean Up Oil Spills?

There are many ways to clean a spill. Dispersants, a type of chemical, are mainly used as a clean-up tool. They can break oil into smaller parts and decompose the bacteria living in the water. However, using dispersants may make the environment worse.

Another method of cleaning up oil spills involves placing a floating barrier around the oil and lighting it on fire, but this usually leads to pollution. Using machines to help separate the oil from the water may work, however, if a leak is ongoing, such a machine may not be able to keep up with the rate of contamination.

When animals arrive at cleaning centres, oil is flushed from their eyes and intestines and then they’re examined for broken bones, cuts and other injuries. Next, they get a stomach-coating medicine to prevent any more oil from entering their systems.

We can always raise money and make donations to agencies in charge of the clean-ups, such as the National Wildlife Federation. Cutting down on oil use in everyday life is a great way to help. Walking or using a bike instead of riding in a car can make a huge difference.

Something a city can do is decide to pave its roads with cement instead of asphalt. This way, we can really work together and make the world a better place and see a better tomorrow.