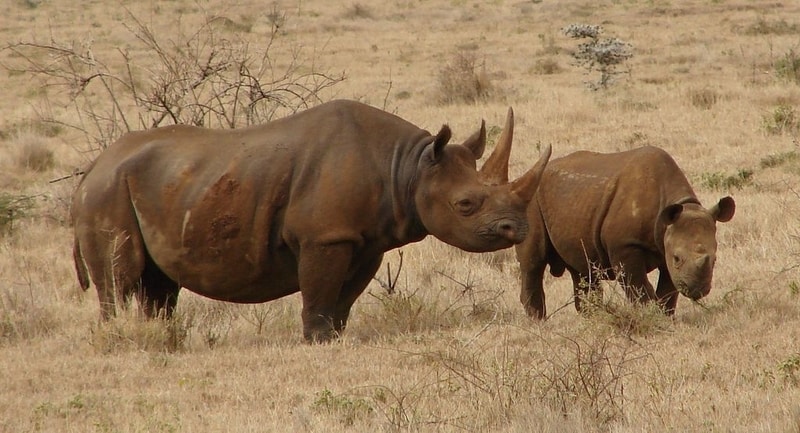 The numbers of African black rhinos are slowly rising, say a group of experts who work to protect threatened animals. The increase in numbers is rare good news for animals that have suffered great losses because of poaching.

In the past, thousands of black rhinos roamed Africa in the area south of the Sahara desert. Over the years, these huge animals were almost wiped out, mainly because of poaching.

Poachers kill rhinos for their horns. Other people, called “traffickers”, buy the horns and sneak them out of the country. The traffickers sell the horns again for even more money, usually in Asia.

In some parts of Asia – especially China and Vietnam – many people think rhino horns have special powers. They pay a lot of money for the horns, sometimes grinding them into powder, and selling the powder like medicine. Rhino horns can sell for more than $27,000 a pound ($60,000 a kilogram).

But the IUCN (International Union for Conservation of Nature) says that things seem to be improving slowly.

Governments and animal protection groups have taken steps to protect the rhinos. One reason the numbers are better now is because there are stronger laws, and more action is taken to make sure those laws are followed.

Check This Out Next: Tiger Populations in India Have Increased More Than 30% In Four Years

There have also been efforts to make the rhinos stronger as a group and to spread them out over a larger area. In some cases, rhinos have been moved to new locations in the hope that they will settle in the new areas and give birth to more rhinos.

Black rhinos are still in danger, but the slow increase in numbers is a good sign. The numbers of the rhinos have been going up by about 2.5% a year. In 2012, there were 4,845. By 2018, that number had risen to 5,630. The IUCN expects the numbers to continue rising for the next five years.

Poaching is still the largest problem facing the rhinos. Poachers killed at least 892 rhinos in 2018 alone.

But there are other problems, too. As humans spread out and take over more natural land, there’s less land for animals. Right now, many black rhinos are in small protected areas. But for the numbers to really increase, the rhinos will need large spaces that are connected.