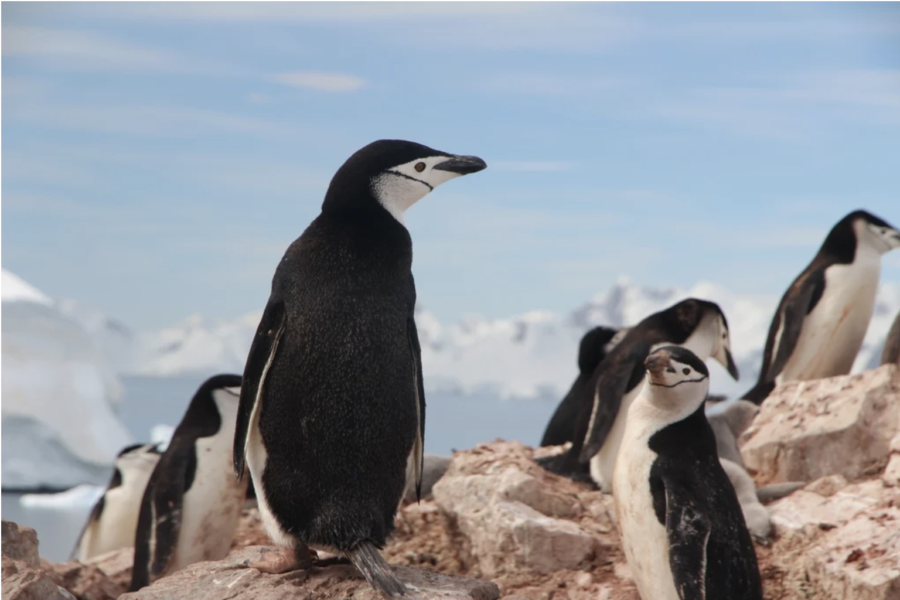 Chinstrap penguins may struggle to survive with warming Antarctic temperatures.

Number of Chinstrap Penguins Fall As Temperatures Rise In The Antarctic

The climate crisis and increased human activity in the Antarctic Peninsula have caused the number of chinstrap penguins to decrease by more than half. This is particularly alarming because the species was rated ‘Least Concern’ by the International Union for Conservation of Nature in 2014, meaning that it was at low risk of extinction.

The Antarctic region has been severely impacted by global warming as the heatwave in February showed a record high temperature of 20°C! Average temperatures have risen 3°C in Antarctica over the last 50 years, which is much higher than the air temperature rise across the globe.

The Chinstrap penguin is one of five penguin species found in the Antarctic, the Scotia Sea and a range of islands. These penguins are also nicknamed ‘ringed’, ‘bearded’ and ‘stonecracker’ penguins. There are approximately 13 million penguins in the sub-Antarctic and the Antarctic Peninsula regions, with around 7.5 million breeding pairs of chinstrap penguins. Chinstrap penguins often form large colonies on icebergs to live and breed. They are near-shore feeders, meaning that they catch krill and small fish near the iceberg that they inhabit.

A team of scientists from Stony Brook University recently discovered that the number of chinstrap penguins’ breeding pairs have dropped to less than half on Elephant Island since 1971.

Check This Out Next: Finding Hope for Orangutans’ Future

Why are the Numbers of Chinstrap Penguins Falling?

There have been little conservation efforts for the penguins as they were not considered to be endangered until recently. Some penguin colonies have not been counted for 30 years. This means that there is a lack of data on these animals.

The decline in the populations of chinstrap penguins is a result of reduced breeding success and increased deaths, probably due to less available krill, which is a major part of the penguins’ diets.

In recent years, krill fishing has become popular. The global krill industry is expected to grow 12% a year up to 2021. Krill populations have declined by 80% since the 1970s due to overfishing and more people wanting to buy health products with krill in them. The warming temperatures in the Antarctic have also caused the ice that is home to the algae and plankton that krill feed on to melt very quickly.

Some good news is that the UN is discussing a global ocean treaty that aims to conserve marine biodiversity by including areas outside of national boundaries of coastal states by 2030. However, to protect these penguins from extinction, immediate climate action is needed as well as ensuring that sustainable fishing practices are put in place.