5 Fascinating Facts about Orangutans for Kids

On August 19, we celebrate International Orangutan Day. Here are some fascinating facts about these highly intelligent animals for kids to learn.

1. Orangutans Can Live Up to 60 years

While most orangutans in the wild live up to 30-40 years, some of them can even reach the age of 60. Male individuals usually weigh around 100 kilograms (220 pounds) and may attain a height of 1.3 metres (4.3 feet), whereas females are usually a third to half their size, weighing around 37 kilograms (82 pounds).

Orangutans are large apes that share nearly 97% of the same DNA as humans, making them one of our closest relatives. Not surprisingly, they are also incredibly smart animals, capable of using a variety of sophisticated tools and build elaborate sleeping nests from branches and foliage.

One of the most interesting facts about orangutans is that they have disproportionately long arms that can span up to 2.2 metres (7.2 feet), much longer than their bodies. They use them to form a secure hook that allows them to travel from tree to tree. Despite spending most of their time in trees, orangutans are semi-terrestrial and walk on all fours when on the ground. 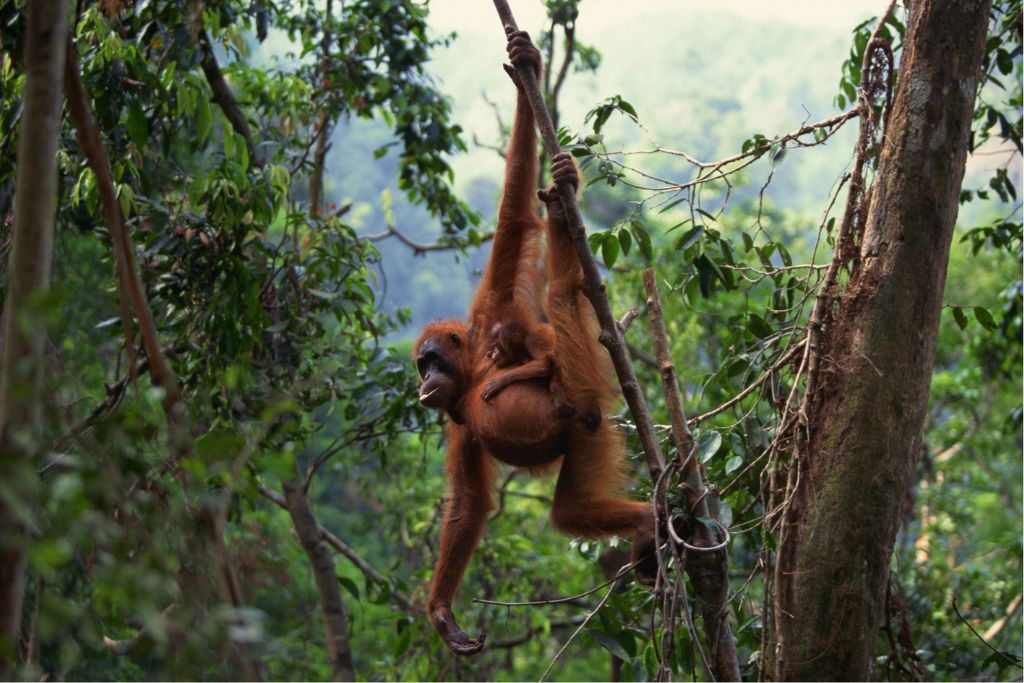 4. Orangutans Are Very Attached to their Mothers

While most mammals tend to stay close to their mothers during the early stages of their lives, orangutans stick to their mothers for much longer, most at least until the age of seven. Young orangutans will ride on their mothers’s body when walking and travelling from tree to tree and they typically sleep in their nests. It is during this early stage of life that they learn to hunt for food and use different tools.

Much like us humans, the great ape’s opposable thumbs and big toes come in handy when they’re hunting for food, and have often been known to make use of tools such as sticks and branches to reach termites and ants out of small spaces. Orangutans eat more than 300 different kinds of fruits, and they’ve learned to use leaves to form a protective glove when handling pricklier fruits.

Unfortunately, all three species of orangutans that exist in the wild – the Bornean, Sumatran and Tapanuli – are currently considered to be critically endangered by the International Union for the Conservation of Nature (IUCN). There are fewer than 70,000 Bornean, 14,000 Sumatran and 800 Tapanuli orangutans left in the wild. As they’re only found in swamp forests of Borneo and Sumatra, the species is incredibly vulnerable due to increasing harmful human activities, including deforestation, wildlife trade, and tourism.

If you enjoyed these facts about orangutans, make sure to check this out next: 6 Interesting Elephant Facts for Kids