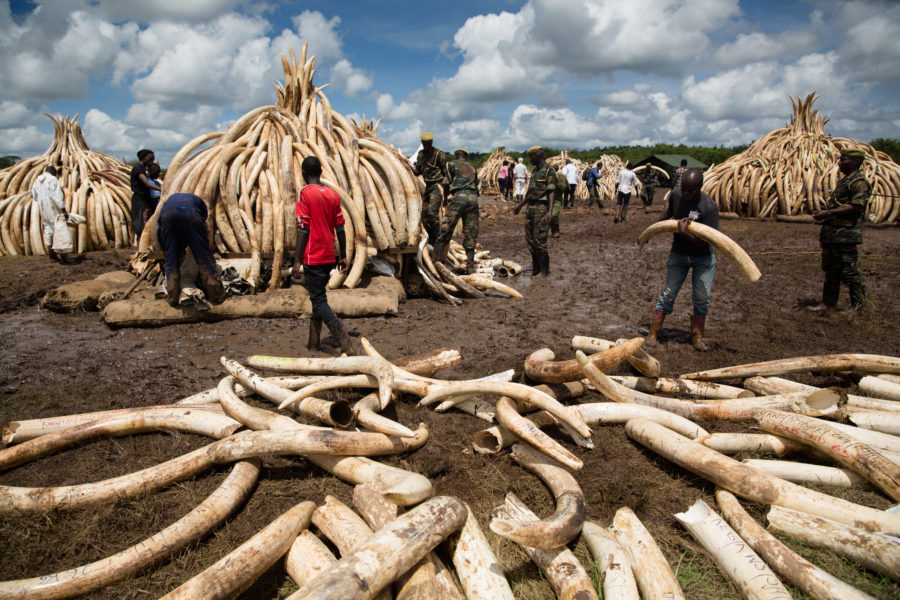 Millions of animals from thousands of species are killed by poaching every year. Many elephants are poached for the ivory trade as shown above.

Poaching refers to the illegal killing or capturing of wild animals, which is occurring on an enormous scale with millions of animals from thousands of species across the world being captured and killed every year. Approximately 30 000 species are driven to extinction every year, with poaching being one of the main culprits of this devastation.

The global wildlife trade is an industry that is fuelling poaching practises. Many animals are captured and killed to be sold locally or into the growing wildlife trade, particularly in Asia, a major consumer of wildlife. Some captured animals include grey parrots, reptiles, certain groups of monkeys and lemurs, that are sold as exotic pets to be kept in cages. Other animals are poached to be used for food, jewellery, decor and traditional medicine. Black bears are poached for their bile used in traditional medicines, ivory tusks of African elephants are carved for decorations, pangolin scales are ground into a powder for their supposed healing powers, snake meat is eaten in parts of the world such as Africa and China – the list goes on. Poachers also kill animals to keep them from destroying crops or attacking livestock. This happens to animals across the globe, such as snow leopards, wolves, elephants and lions.

What are the Effects of Poaching?

Poaching is a huge contributor to the extinction of some species. The Passenger pigeon, Tasmanian tiger and Steller’s sea cow are among a list of species that have been poached to extinction. Other animals that are particularly threatened by poaching are the African elephant and rhino and tigers. According to the WWF, tiger populations are most threatened by poaching. On average, 96 African elephants are killed per day, with more than 100 000 killed between 2014 and 2017. Although the number of rhinos being poached in South Africa has decreased in recent years, a rhino is still killed every 15 hours on average and populations are far from thriving.

The loss of wildlife populations to poaching affects the balance of ecosystems. Fruit-eating animals help to disperse seeds to maintain a balanced growth of trees. Without them, some trees with bigger seeds will dominate the forests while ones with smaller seeds will die out.

Animals that are poached for the exotic pet trade often suffer from great stress and trauma as they are unable to eat the specialised diets found in nature and are not provided the space to fly or roam around. They are usually inhumanely stuffed into boxes and suitcases. The mishandling of wildlife by poaching also increases the likelihood of the emergence of zoonotic diseases such as SARS in 2003, and the ongoing COVID-19 coronavirus.

Poaching also causes harm to humans, too! On average, 2 rangers are killed every week across the world, either murdered by poachers or killed in workplace accidents. In Africa, nearly 600 wildlife protection rangers were killed by poachers between 2009 and 2016. The illegal practice also leads to loss of income as wildlife tourism is largely impacted by poaching.

How can Poaching be Stopped?

Efforts to stop poaching are being made by on-the-ground teams committed to protecting animals. Governments are also making poaching a crime punishable by fines or prison. Some conservation groups are also advocating for more sustainable ways for poachers to make a living. Finally, by not consuming illegal wildlife products, the demand for poached wildlife will decrease and no animals will need to be harmed in this way.