Every year on 26 July, we celebrate the International Day for the Conservation of the Mangrove Ecosystem. On this day, people around the world come together to raise awareness of the importance of mangroves, rare and spectacular tropical ecosystems that play a crucial role in protecting the environment and biodiversity on our planet. Unfortunately, they are extremely vulnerable to human activities and climate change. As we reflect on the importance of conservation and sustainable management, here are 6 interesting facts about mangrove trees that will help you understand why we celebrate them.

1. Mangroves Are Some of the Most Important Carbon Sinks on the Planet

As the name suggests, carbon sinks absorb more carbon than they release as CO2. They are natural systems that suck up and store CO2 from the atmosphere. The ocean is considered the largest carbon sink but forests can also absorb huge quantities of carbon through the process of photosynthesis. Mangrove trees can do this, too. For this reason, they are extremely important as they help in mitigating the effects of climate change. They have actually been recorded to absorb almost 10 times as much carbon dioxide from the atmosphere than terrestrial forests!

2. Mangroves Defend Our Coasts Against Floods and Tsunami

Mangrove forests act as shields that block strong winds and waves as they pass through. For this reason, they can defend communities that live on the coast from major storms and hurricanes as well as the impact of flooding. Their incredibly dense roots can also help bind and build soils, which slow down water flows and reduce erosion and sea level rises.

One of the most devastating effects of the climate crisis is coral bleaching. Coral reefs are the world’s most diverse marine ecosystems, home to 25% of the world’s marine species but hey are slowly being destroyed by plastic pollution, overfishing, ocean acidification, warming waters and human activities. Thankfully, healthy mangrove forests can provide shelter for coral species at risk from coral bleaching, as well as reducing ocean acidification. 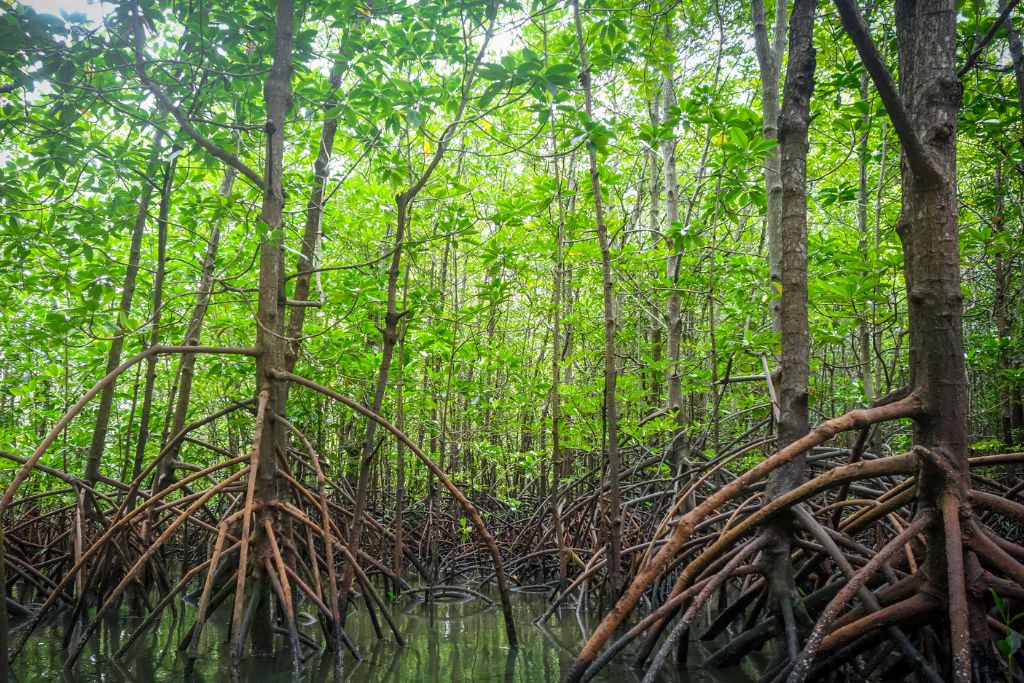 4. Mangroves are Found in Salty Water

The species can be found along shores, rivers and coastlines in 118 tropical and subtropical countries, and they live in water up to 100 times saltier then most other plants are able to tolerate. Most of these trees live and thrive on muddy soil and can filter out as much as 90% of all the salt in seawater when it enters their roots.

5. Mangroves Cannot Be Replanted Once Deforested or Destroyed

Deforestation of mangroves would lead to land erosion and degradation, and in its absence, coastlines would be reshaped by incoming tides and currents. As a result, it becomes increasingly difficult to replant mangrove back to their former shape and habitats.

6. Indonesia Boasts the Largest Ecosystem of Mangroves in the World

The country is home to the world’s largest population of mangroves, estimated to account for 23% of the world’s total. Some of the mangrove trees here are also among the world’s tallest, reaching up to 144 feet (44 kilometres)! But Indonesia’s mangrove population is on its way down to make way for shrimp farms and palm oil plantations.

Check This Out Next: 3 Facts About Deforestation for Kids